The Witchouse Trilogy (Part 3 of 3) 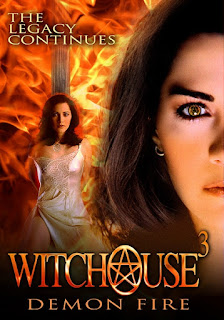 Score: 3 out of 10
Well, I'll﻿ just go ahead and say it: This was a total waste of ten dollars. The whole trilogy just plain sucks and I even feel bad just for having watched these stupid, stupid movies. "Witchouse 3: Blood Coven" was directed and written by J.R. Bookwalter (who also directed the second film) and stars Debbie Rochon, Tanya Dempsey and Tina Krause. The plot of the film is three girls filming a documentary about Wicca (I actually know people who are Wiccan and would probably be offended by this movie) and in the process conjure up a long deceased witch named Lilith. Lilith, by the way, is one of the biggest problems with this film. She is played by a diferent woman than the woman who played her in the first two films. On top of that, Brink Stevens (Witchouse 3) looks nothing at all like Ariuana Albright (The Lilith of Witchouse 1 and 2). Just to add insult to injury, Stevens portrays the character in a completely different manner. She shares none of the manerisms or speach patterns that Albright exhibited. 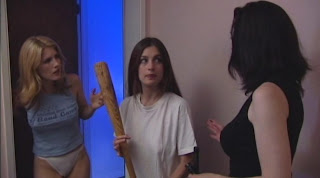 In addition, Lilith's mentallity has changed as well. Instead of attacking her victims in a straight forward manner, she now plays mind games with them for a while first. This one character completely ruins the continuity from the second film to the third. On top of that, the acting is bad, the quality of film has dropped off dramitcally from the previous entries and the plot sometimes just seems nonsensical. Do yourself a favor. Avoid all three of these movies. The only fear they have installed in me is that I'll never be able to get rid of them.
Love,
The B-Movie Guy.
Facebook: B-Movie Guy   Twitter: @BMovieguy   #BMovieblog   #Witchouse3