The Witchouse Trilogy (Part 1 of 3) 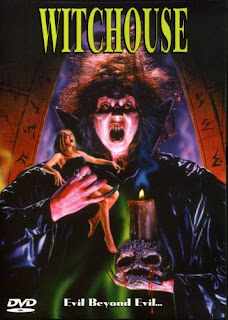 Almost every morning on my way to my day job, I stop at the local convenience store (I won't name the establishment, we'll just say their name is based on what their hours of operation were at one point) for my morning cup of coffee. A few days ago I noticed they started selling used DVDs. Never being one to pass up an interesting buy, I stopped to lake a look. That is when I noticed a box set for a trilogy of films entitled "Witchouse." I figured for ten dollars, even if they suck at least I am not out that much money. Well, get ready, because now I feel cheated out of ten dollars. "Witchouse" (BTW, if you google "Witch House or Witchhouse" you will not find any thing about the movies. Would it have killed them to use one of those two spellings?) was directed by David DeCteau (who is also responsible for Puppet Master III, also produced by Full Moon) and stars(?) Ariauna Albright, Matt Raftery and Ashley McKinney. 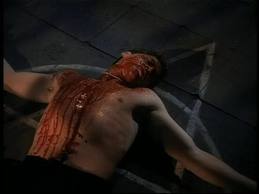 This movie is so bad, it is almost like a bad joke. In fact this movie is so boring I actually found myself fighting sleep through most of it. Every time it seemed like something interesting was about to happen it would just fizzle. The plot revolves around a girl throwing a party for her class mates and it turns out that she is the descendant of a witch burned at the stake and her classmates are descended from the people that burned the witch (Think I am giving to much away? you can actually get that much by reading the back of the box). The bad acting, writing, directing and special effects (seriously, for a movie made in 1999, the effects are on par with an early eighties made-for-t.v. movie) do not do this movie any favors. The sad part is I still have two more films to go. Ugh.