Tucker and Dale VS. Evil (It's like Deliverance, only funnier) 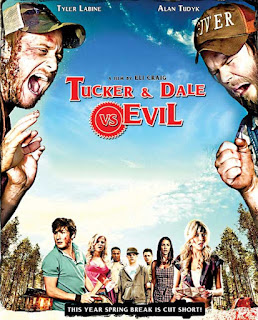 Boy, did I misjudge this one. When I first saw the title on Netflix I thought, "No way. That looks really stupid." Then I thought back to some of the other films I have blogged about and still thought "No." Then my father-in-law and my wife (who normally hates my taste in movies) spent quite a while ranting about how funny it was and how much I would love this. Reluctantly I sat down and was proven total ly wrong. "Tucker and Dale vs. Evil" is about two backwards-ass-rednecks who buy a summer home (an old run down shack that kind of reminds me of the old "Friday the 13th" sets) and accidently scare some colledge kids camping in the area. Later they rescue one of them from drowning and the poor girl's friends believe that our redneck heros have kidnapped her and attemp to get her back resulting in some hilariously gorey scenes. It stars Tyler Labine, Alan Tudyk and Katrina Bowden. It was Directed by Eli Craig. 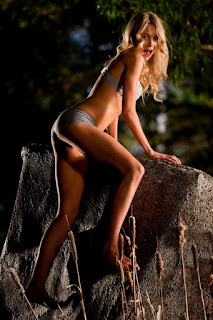 Friends, I know why most of you guys read this blog (I do see the analytics once in a while) and personally I'm a little offended. That being said, I am not going to tell you if this film has any nudity or not. You will just have to look at the picture to the right and judge for yourself. Regardless of boobies or no boobies, this film was hilarious! I was genuinly laughing and there were quite a few moments where I was thinking "Wow, that is really gory!" In addition, the story was pretty believable (probably more so than a lot of the films it lampoons) and the acting was pretty top notch. I mean, you are most likely not going to see any of these actors or actresses win any academy awards, but if I happen to see their names on a movie poster it might get me to watch another film. Another thing I would like to point out is how much amazing chemistry was between Tyler Labine and Alan Tudyk (Tucker and Dale), These two work so well together on camera that I would be willing to believe that they are best friends in real life. I would love to see them revive these characters for another few movies.