The Immortalizer (So Bad You Probably Shouldn't Even Read A Review) 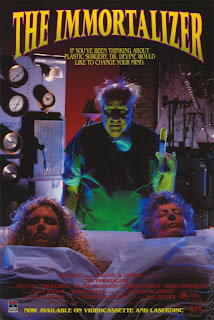 Score: 3 Out Of 10
Every time I think I find the worst movie ever I prove Myself wrong. "The Immortalizer" is so bad that I even have a hard time trying to find information about it online. It's almost as if the entire world has acknowledged how bad it is and decided to just forget it. After watching it I can't say I blame anyone for wanting to forget it. It was directed by Joel Bender (any "Power Ranger" fans out there should recognize that name) and stars Ron Ray, Chris Crone and Clarke Lindsey. None of these people do a good job on this film and all should feel ashamed of it. I hope the memory of this movie haunts their dreams at night. I feel really bad giving this film a bad review. The reason is because I almost always love 80's horror movies. This was the decade that really brought some memorable scares, a lot of which are mentioned on the "B-Movie Bucket List," by the way, but this one just makes the entire decade look bad.

The plot is as simple as it is boring. A mad doctor kidnaps young people so old people will pay him to put their brains in the younger bodies. That's it. How they managed to get more than an hour out of that plot is beyond me, but somehow they managed to drag it out to about an hour and a half. When I say drag, by the way, I really mean DRAG. This movie was so unbelievably boring I had a hard time sitting through it. I made it about half way then I pulled out the iPad and started reading the IMDB page for it. That led me to the IMDB page for "Power Rangers" and, I'm not kidding when I say this, I got way more interested reading the trivia section for "Power Rangers" than I did actually watching the movie. Do yourself a favor, if you feel like watching this movie, instead click the link for "MMPR" and read the trivia section instead. It's WAY more interesting.

Email ThisBlogThis!Share to TwitterShare to FacebookShare to Pinterest
Labels: Immortalizer

The Slumber Party Massacre (Naked Women And A Serial Killer, It Must Be The 80's.) 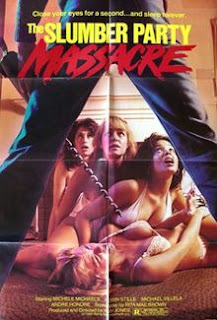 Score: 4 Out Of 10
A few weeks ago I blogged about a film produced by Roger Corman and when looking for something to watch this week, I saw his name and thought, "Why not?" Excuse me, Mr. Corman? Hi. I know you're a legendary producer and are responsible for one of my favorite movies, but could you please give me back the last 77 mins. of my life. Thanks. Don't get me wrong, I'm not saying I didn't enjoy all the lovely naked women who appeared in this horror comedy, but the fact of the matter remains. I did not laugh and I am not feeling to frightened. So as a horror comedy I will have to say this one is a fail. "The Slumber Party Massacre (witch spawned two sequels by the way... I know, right... Two... A trilogy!)" stars Michelle Michaels, Robin Stille and Michael Villella. It was directed by Amy Holden Jones. I'm not joking when I say this, she also Directed the "Beethoven" films. Remember those? The cute dog movies where the family falls in love with the Saint Bernard. Apparently it only took ten years to go from drilling naked teenagers (pun) to family dog movies.


Alright, let's get down to why this movie stunk. The main problem: It's a horror COMEDY. So why wasn't I laughing? Answer: Because they followed the "Corman Philosophy" of film making. Fill it full of blood and boobies and hope horny teenagers pay to see it. But overall it even fails in that respect. Most of the nudity is right up front. After thirty minutes all you're left with is a fully clothed (with one quick exception), unfunny and flat out predictable horror film. They even had a cat jump out and scare the main character. If you really want to have fun with this movie, invite some friends over, get some alcohol going and you guys can take shots every time someone notices a cliche. Or you could just watch a good movie.