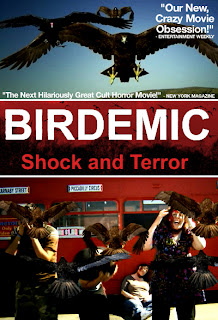 Score: 2 Out Of 10
Every so often, I come across a film so bad, I'm not even sure how to tell you how bad it is. Seriously. This film is so awful, I actually feel like the creators some how cheated me. When it ended I just felt angry. The kind of angry that if the director was sitting next to me, I might have punched him. "Birdemic: Shock and Terror" was written and directed by James Nguyen. It stars Alan Bagh, Whitney Moore and Janae Caster. The plot is a straight up rip off of the birds. A man meets a girl. They fall in love, and then they get attacked by horrible CGI birds. In fact the CGI in this film is so bad that the birds more resemble characters from a Super Nintendo game than actual birds. In addition, the CGI is so over used that even when the couple stumbles upon a dead bird, it to is completely computer generated. To make things even worse (yeah, it actually gets worse) when ever there is dialogue taking place out doors there is so much ambient noise you can not make out what people are saying. Why not just dub the voices in post?!

That brings me to my next point. The acting is so bad it is almost criminal. Instead of anti-piracy laws, we should pass a law against acting this poorly in a film. Although the blame should not go to just the actors, the dialogue was so bad I found myself getting a headache. In one scene a man remarks about them suffering a heat wave in the middle  winter. A few scenes later there is a "Pumpkin Festival" where a banner clearly points out that it is late October. I can not in good faith recommend anybody watch this horrible abomination of film making. I myself just feel like I lost an hour and a half that I will never get back.
Love,
The B-Movie Guy.