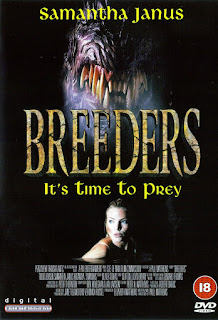 Score: 3 Out Of 10
So I'm browsing through Netflix to try and find a movie to watch, and a Film called "Breeders" catches my eye. Apparently a movie about a meteor that crashes on a college campus and the hideous monster inside that insists on breeding (obviously) with the female students. I should point out that I initially was a bit confused because of the 1986 film of the same title, but that is a different film entirely (maybe even another blog post). This film was released in 1997 and was directed by Paul Mathews and stars Todd Jensen﻿, Samantha Womack and Oliver Tobias. Granted, I have never heard of anybody in this film or even knew it existed, but the mid to late nineties were a pretty good time for cheesy horror/sci-fi flicks ("The Dentist (96)", "Bleeders (97)" and "A Wicked Ghost(99)"). So, feeling fairly confident, I popped my popcorn, loaded up the movie and settled in for what I was sure was going to be a pretty good time. 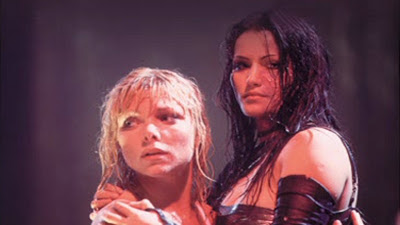 I was so wrong. By an hour into the film I was fighting sleep. In fact I actually went to bed and watched the last ten minutes in the morning when I awoke. Even with a plot this cool the movie overall felt boring. To make matters worse, I am not even sure why the movie was boring. The pacing was good, the creature affects were pretty cool and the dialogue and acting were passable (I mean not great but certainly not bad). Yet, overall, it was just plain boring. In closing, I have to say I am very disappointed. I guess just expect more from a movie about an alien beast "mating" with human women.
Love,
The B-Movie Guy
Facebook: B-Movie Guy   Twitter: @BMovieguy   #Breeders   #BMovieblog