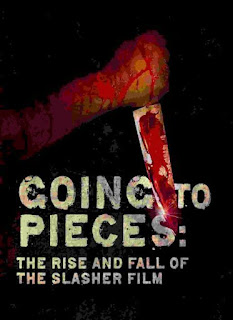 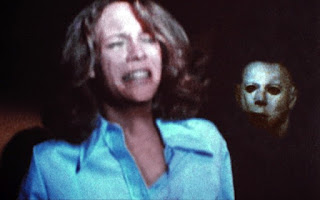 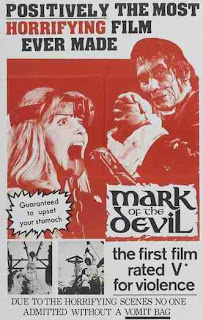 The picture to the left proclaims this to be "the most horrifying film ever made," and that might have been true in 1970, but by todays standards, I think it is actually pretty tame. Some people get burned alive, a few people get caned or whipped and one poor girl gets her tongue yanked out. Most amusing of all the torture was a guy being forced to sit in a large wooden chair while a fire is lit underneath him. The film takes place during the sixteenth century in germany and focuses on the real life early European wich hunts. I do not know how much of the film is accurate or how much of it is exagerated (I am willing to bet quite a bit is exaggerated), but over all the story is pretty good. The story focuses on the church using religion and fear to steal peoples land and possessions and rape and torture big brested women. One of the people working for the church begins to suspect wrong doings and starts to rebell.

"Mark Of The Devil" was directed by Michael Armstrong and stars Herbert Lom, Udo Kier and Olivera Katarina. The acting here is pretty solid, especially on the part of Kier (but when does Udo Kier ever putting up a bad performance? Answer: NEVER!). I am used to seeing movies where you have the worst actors and actresses and Kier just 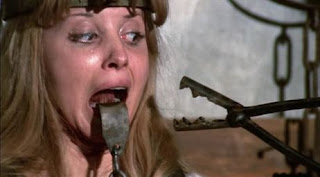 giving stellar performances, but this was not the case with this film. Everybody shows off some pretty good acting chops. The main problems with this film were not so great dialogue and the lack of real gore. Admittedly I am pretty decensitized but I do not believe that the average film fan is that much less decesnsitized than I. Most of the violence is mainly just blood splatter. A few people are dissmembered but the camera cuts away before you really see anything. A couple people get burned alive, but it just looks like dummies being tossed on fires.

On the positive side, it did keep me somewhat enter tained for about ninety minutes, so I guess I shouldn't complain too much. I should also mention that there were some rapes in there too. In fact, in hindsight I guess this could almost be considered an exploitaion film.

Email ThisBlogThis!Share to TwitterShare to FacebookShare to Pinterest
Labels: Mark of the Devil

Bloody Birthday (Way Cooler Than My Parties Ever Were) Score: 6 Out Of 10
In 1974, "Black Christmas" was released. Most horror fans are in agreeance that this is the film that started the "slasher" sub-genre of horror films (although I swear I've seen films that date as far back as the early 1930's that share in the same formula as "Black Christmas", this is just the first to experience any kind of popularity) and since it's release there have have been countless other films added to that sub-genre. Over the years I have seen horror movie psychos (both human and supernatural) mow down a seemingly endless parade of naked and semi-clothed teenagers. But I have to admit, I think this one actually showed me something new. The ruthless killer that beats, strangles and shoots it's victims to death is really just three young kids (they look to be about 11 or 12). The film stars Lori Lethin, Melinda Cordell and Julie Brown. It was written and directed by Ed Hunt.

The plot is simple enough. Three kids who share the same birthday decide to celebrate it by killing their teachers, classmates and parents and seem to really have fun with it all the way through the movie. This movie, despite the fact that it's antagonists are children, still delivers on all the nudity and violence we've come to expect from 1980's slasher films over the years, so if sex and violence is your thing don't rule this movie out. The writing isn't bad, it could have been better, but what really sells you here is the acting. It was very easy for me to buy into really hating these kids, which in hind sight makes me sad because I really like kids. All in all, I'm gonna say this was a really entertaining film. There were some unintentional laughs but over all it was pretty good.