Abraham Lincoln Vs. Zombies (I Was Cheering For The Zombies) 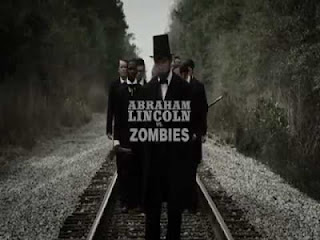 Hey guys, I just heard about this book that is getting super popular! So popular that they are actually making a movie out of it! It's about Abraham Lincoln fighting vampires. Now I know this sounds crazy, but what if we made our own movie where Abe fights zombies and we completely ignore history and just put it out as soon as possible! That could work, right? The answer is no. No it does not work. "Abraham Lincoln Vs. Zombies" was released in 2010 and was directed by Richard Schenkman and stars Bill Oberst Jr., Kent Igleheart and Rhianna Van. Having Spent an hour and thirty minutes watching this stinker of a film, I can honestly say I hate all of the people I just mentioned. 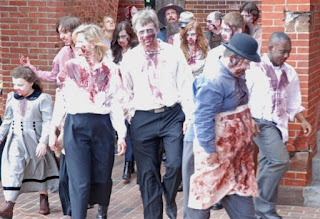 So where does this film go wrong? Everywhere. The make up effects where terrible. When you make a zombie film you really have a chance to get creative with the zombies themselves. Think about the variety of ways that these people would have died, then incorporate that into there make up. Apparently all these people died from natural causes or simply a zombie bite. Then there is the special effects. There was so much bad CGI in this movie at times I felt like I was watching someone play a video game. In fact, they used CGI to make fire and smoke come out of the guns. This creates many shots where guns that are not cocked get fired. you never see the hammer move at all!

On top of this the writing was just bad and the acting was worse. The majority of the action takes place in the south, but the characters who are found living there just barely (if at all) have a southern accent. Overall this movie was pretty bad. I have to admit I actually feel ashamed just for having watched it in the first place.