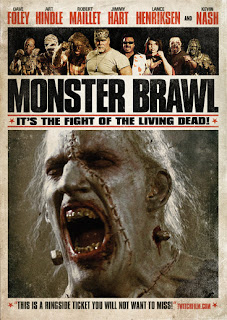 Score: 7 out of 10
I grew up with prowrestling. As a child I was a hulkamaniac﻿, in my teens I was a Triple H fan (this is when he was the "blu blood" and we called him Hunter Hearst Hemsley) and now I find my self typically rooting for C. M. Punk. That being said, I also grew up completely in love with Universal monsters. Frankenstien (to date I have watched about twenty two Frankenstien films, one of which on 8mm reel to reel), The Wolfman, Dracula, The Creature From The Black Lagoon and even The Mummy. I absolutely loved all of them. So imagine how happy I was to see that two of my great loves have been brought together in one movie... and it doesn't suck! "Monster Brawl" was written and directed by Jesse T. Cook. It stars Dave Foley, Art Hindle and Robert Maillet (bonus points if you remember what his name was while with WWF).  Also, expect some pretty cool appearances from Kevin Nash, Jimmy Hart and Herb Dean (he is just as bad a referee in this film as he is in real life... just sayin'). 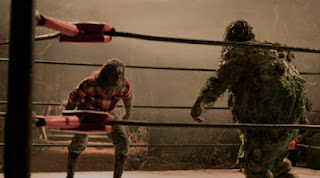 Well I have to start by saying that this is a fun movie. It is pretty fast paced, it does a good job of introducing and building up the characters and does a good job of using devices used by actual wrestlers to sell a match, including having the monsters trash talk each other before the matches. In fact, most of the movie plays out much like a wrestling pay-per-view. The film does not skimp on the gore, either. Mr. cook does a pretty good job of making this feel both like a wrestling show and a horror movie. On the downside, the matches are a little short and sometimes the whole thing can just feel a little too cheesey. Honestly though, this is just a fun movie you can turn on when your friends are over, have some popcorn and get some good shits and giggles going. Don't build it up to be anything more and I promise it will not dissapoint you.
Love,
The B-Movie Guy.
P.S.
Thanks to my friend Natalia for bringing this film to my attention.
Facebook: B-Movie Guy   Twitter: @BMovieguy   #BMovieblog   #MonsterBrawl