Vampire Girl Vs. Frankenstein Girl (Why are the Japanese so racist?) 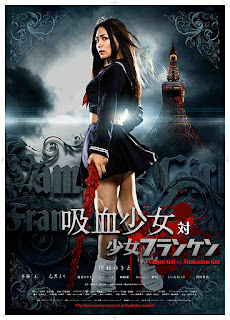 I'm not sure where to start, so I'll just address the elephant in the room. This film is kinda racist... okay, it's really, really racist. There is a group of Japanese girls wearing black make up and wearing prosthetics acting like complete and total (American) black stereotypes. One of them at one point attacks another student with a spear and in another scene three of them are playing bongos and chanting, "Obama! Obama! Obama!" It's pretty bad.

If you can get past that, it's otherwise not a bad movie. I mean, the CGI sucks, the acting sucks, there's no nudity, and it really doesn't get all that gory until the last twenty minutes of the film. Okay, so maybe it was pretty bad. But it didn't feel that bad while I was watching it. The movie is almost ninety minutes and was directed by Yoshohiro Nishimura and Naoyuki Tomomatsu. It stars Yukie Kawamura (vampire girl) and Eri Otoguro (frankenstein girl). It was released in 2009.

So i guess the redeaming quality here is the crazy Japanes humor. The film is more often then not really funny... I mean minus the black thing. It's hard, I really want to like this film, but I think most people who read this will go, "Wow B-Movie Guy, your a racist!" Mybe that's a rediculous fear, but it is still keeping me from giving this film a good review. Well, that and the fact that minus the rest of the comedy, it pretty much sucked. Anyway, watch it and deciede for yourself. Then you can email me after and we can talk about how guilty we feel for having enjoyed it. I really am going to hell.