Hobo With A Shotgun (When life hands you razor blades...) 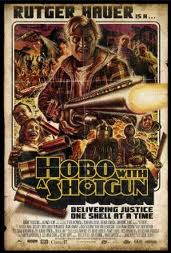 Score: 10 Out Of 10
"I used to be like you... a long time ago. All brand new and perfect. No mistakes, no regrets. People look at you and think of how wonderful your future will be. They want you to be something special... like a doctor or a lawyer. I hate to tell you this, but if you grow up here, you're more likely to wind up selling your bodies on the streets, or shooting dope from dirty needles in a bus stop. And if you're successful, you'll make money selling junk to crackheads. And don't think twice about killing someone's wife, because you won't even know it's wrong in the first place. Maybe... you'll end up like me. A hobo with a shotgun."
This movie really got me going. It had everything! A compelling story, violence, boobies (briefly), and hobos! The story revolves around a hobo (who is never actually named) who witnesses a decapitation in the streets, stops a rape, is beaten down by a dirty police chief, befriends a prostitute, engages in spirited conversations about bears and grabs a shotgun during a robery and starts blasting bad guys. Soon after he decides to make a career out of blasting bad guys and the movie becomes a true epic of b-films. It was directed by Jason Eisener and stars Rutger Hauer, Brian Downey and Molly Dunsworth. It runs for 86 mins.

Another cool thing about this movie is that while watching the it I got the feeling that the people who made it were really passionate about it. Rutger Howard and Brian Downey turn in really great performances and have great chemistry playing opposite of each other! Another thing that deserves mention is the way the violence is portrayed. The movie never seems as violent as it really is (with maybe a couple of exceptions) because of how over the top oit is. More often than not while watching, the violence reminds me more of an "Itchy and Scratchy" short than it does any real life situation. Even when they burned the scchool bus full of children I caught myself giggling... When I read that last sentance back out loud, it sounded pretty bad. Can we forget I just said that? Please?

In conclusion, this was a movie well worth it's run time. It was funny, compelling and and got a good couple of shocks out of me! Perfect for entertaing a group of drunken friends.