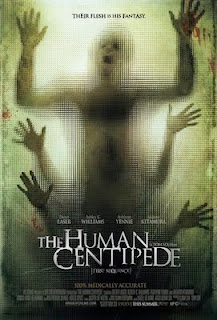 Score: 4 Out Of 10
For about a year now, people have been coming up to me and asking, "Hey, B-movie Guy, have you seen Human Centipede?" In fact, almost every time I get into a discussion about this blog, or B-movies or movies in general, this particular film always seems to get mentioned. Some people have ranted about how absolutely disgusting it is while others seem to laugh and go on about how much fun they had with it. I am neither of those.

One thing I feel is important to mention is that I actually felt disappointed in a weird kinda way because they never actually show the surgery being performed. There is all kinds of build up, including a really creepy scene where the good doctor explains the surgery to his patients, and then they just skip over it and show you the end result. In fact most of the violence in this film is really no worse than any random 1980's action film. Most of the really gross stuff is really just in your head. Even the scene where the first segment realizes they have to poop. You just see a lot of crying and some dry heaving.
So over all, I have to say this film was some what of a let down. I really didn't get any of the big shocks or gross out moments I was waiting for. I can appreciate that Tom Six went the more psychological route and let his audience imagine most of the real terror, but this film was marketed on the premise that it is the sickest thing you will ever see. Unfortunately that is what kills it. They should have marketed it as a psychological horror film and not a gross out movie.