I Spit On Your Corpse. (SO MANY BOOBIES!) 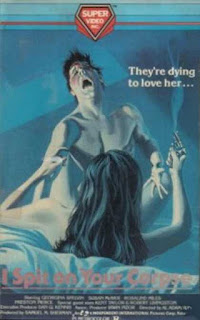 Score: 10 Out Of 10
I'm not gonna lie to you. I really expected this movie to suck. I took one look at the title and thought, 'Great, another movie re-released with a new title (It was originally released as "Girls for Rent") to try and cash in on the underground success of the "I Spit On Your Grave'" remake. I wanted to hate it. I wanted to sit in the couch and spend 90 mins. making fun of it then write a blog where I tell people about how it was the worst movie ever. I was so wrong, it's a crime. This is quite possibly the most fun I've had watching a movie in a long time. It has everything!

A woman getting topless to fight: Check.

At least one sex scene that has nothing to do with anything: Check.

I'm getting ahead of myself. Let's start at the beginning. The movie stars Georgina Spelvin, Susan McIver and Rosalind Miles and it was directed by Al Adamson. The plot is simple, A women drugs/fucks a guy to death then decides she can't be a call girl anymore so she decides to run away to Mexico. Then, two super sexy seventies assassins give chase thinking she'll talk and ruin the whole prostitution ring they helped build. The assassins then shoot, fight and have sex with everything that stands in there way.
This movie is a prime example of 1970's exploitation and was made much in the same vein as "Switchblade Sisters" and "Faster, Pussycat! Kill! Kill!" So far I have to admit it might be one of my favorite of that particular genre.

Did you watch the trailer? Isn't that fucking awesome! Drop what ever your doing right now and get a copy of this movie to watch! Watch it on Netflix, order it on eBay or steal it off the Internet. I don't care, it's that awesome!

Seriously, it was awesome.

Email ThisBlogThis!Share to TwitterShare to FacebookShare to Pinterest
Labels: I Spit On Your Corpse; Girls For Rent