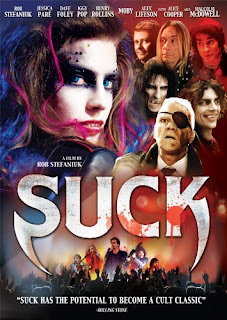 Score: 9 Out Of 10
So what happens when you mash up "Rocky Horror" and "Spinal Tap?" Answer? Suck: A really (not sarcastic) good film about vampires and a rock band. This film was made in 2009 and stars Rob Stefaniuk (who also wrote and directed it), Jessica Pare (BTW, if someone could email me and let me know how to get letters with accents on this thing it would be greatly appreciated. Thanks.), Alice Cooper and Malcolm McDowell. Not to mention cameos by Henry Rollins, Moby (because nothing says heavy metal vampires like Moby) and... OHMYGODITSIGGYPOPILOVEIGGYPOP!!!!... I mean... and Iggy Pop.

Our film opens up to a failing rock band who after a horrible gig in Canada has their bass player(Jennifer) seduced by Goth Carrot Top.

Yup, that's him. I mean, seriously, every time this guy was on camera it was an unintentional laugh. Anyway, after the seduction, poor Jennifer is turned into a vampire and soon starts infecting the rest of the band. This movie features plenty of jokes (most of them actually work),recreations of classic album covers and a soundtrack that actually makes me want to look it up on iTunes (must not admit to stealing music on blog).
This is where I feel I need to make a statement for all would-be-filmmakers out there. A lot of people might take away points from this film for it's almost total lack of special effects (it features a toy car for most of the travel scenes). There were no over the top vampire death scenes or gory transformation scenes. Instead what you get is a cast turning in solid performances that really sell you. It was easy for me to get lost in this film because i was able to get behind the characters despite how goofy some of them may have been. In closing I give this film an 8 out of 10. Not really an original idea for a movie, but done very well.

My new favorite line in a movie: "It's okay. I'm afraid of confined spaces... and water fountains.

Email ThisBlogThis!Share to TwitterShare to FacebookShare to Pinterest
Labels: Suck