I am a pretty big fan of the anthology horror films that came out during the 1960's and 70's (ex: "Tales From the Crypt (1972), Twice Told Tales (1963) and Black Sabbath (1963)), so I was presently surprised to see a horror anthology film from 2012. Here is the kicker... IT DOESN'T SUCK! "Scary or Die" was directed by Bob Badway, Michael Emanuel and Igor Meglic. It stars Domiziano Arcangeli, Corbin Bleu and Shannon Bobo. Also keep a look out for Bill Oberst Jr., his appearance in this movie is much better than "Abraham Lincoln Vs. Zombies. Shorter, but Better. The film has five segments and all of them are pretty good. The first is a zombie tale that takes place on the Mexican/American border, the second is about a widow attempting to rescue a woman, third is the story about a murderer who is losing his mind after dismembering a corpse, fourth is the half creepy half silly story of a were-clown and finally the story of woman who returns from the grave to seek vengeance on her husband. 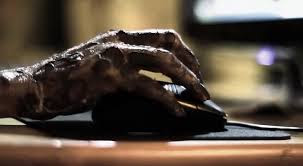 So the nice thing about this style of film making is the pacing is always good. You do not really have time to get bored with it because the stories do not go on long enough to require any kind of filler. Another thing that struck me about this movie is most of the actors played their roles very well. There was not one performance that left me rolling my eyes. The stories themselves were also pretty strong and most of the movie was genuinely creepy, except the clown story. That was more silly than it was creepy. How it made it to be featured in the films advertising is beyond me. I mean, seriously, a were-clown?