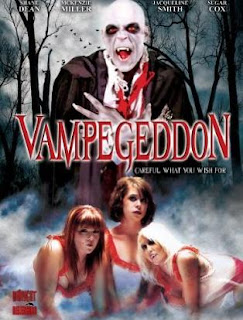 Score: 3 Out Of 10
Ever since the B-Movie Wife made me watch the first Twilight film I have felt a need to see a new movie featuring real vampires. I mean 100% blood drinking, soul stealing, flesh eating, sometimes seductive, undead monsters. Sadly, Vampegeddon does not fill that need. Vampegeddon was directed by Jeffrey Alen Miller and stars Josh Bingenheimer, Sugar Cox (I was actually surprised to find out she is NOT a porn star. I mean, her name is Sugar Cox.) and Shane Dean. I should have known better than to watch this one. The first thing I noticed about it is that it has a one star rating on Netflix. But for some reason I remained hopeful.

When you think about it, this movie does have a lot  of elements I typically like. There is a a lot of blood, a ton of nudity and at an hour and fifteen minutes, I didn't wind up wasting that much time on it. The problems, unfortunately, start almost immediately for this movie. There may be a lot of blood, but the action scenes are few and far between. There is a lot of nudity, but the girls getting naked aren't really attractive. On top of that, the dialogue is terrible, the acting is worse and it sounds like every body's dialogue was recorded in post so what the timing of what the actors are saying doesn't often match the movement of there mouths. This is made worse by the fact that the original dialogue cuts in once in a while and it has so much ambient noise behind it that you can't understand what the person is saying.

Overall, if I had to rate this movie on a scale of one to ten, one being Twilight and ten being Bela Lugosi's Dracula, I would have to say negative two. That's right. In hindsight, I would have rather watched Twilight over again had I known this movie sucked so bad. All the sex and violence in the world is nothing with out a good story to back it all up. Next time I think I'll heed the warning of a one star rating on Netflix.

Email ThisBlogThis!Share to TwitterShare to FacebookShare to Pinterest
Labels: Vampegeddon