Invasion Of The Bee Girls (Bug Spray Won't Save Us) 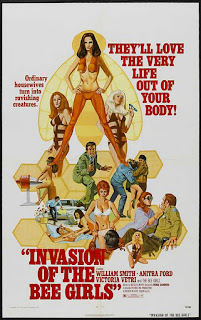 Hello, this week I'm focusing my attention on a piece of real 70's sci-fi awesomeness... Kinda. "Invasion Of The Bee Girls" (I wonder if it's possible to get a bunch of girls to dress as old bad movie stars who call themselves the B-Girls to follow me around) was released in 1973 and stars William Smith, Anitra Ford and Victoria Vetri. It was directed by Denis Sanders. The plot is pretty simples, One girl is some how turned into a girl with some bee genes in her (this just gives her really big pupils and a uncontrolable urge to mate and kill) and she somehow builds a machine to transform other girls who mate and kill uncontrolably. It's not long before men start dying during intercourse and bodies start popping up all over town. By the way, the 'hows' and 'whys' are never fully explained. The characters just keep hinting at various explenations.

I am a man. A man who watches bad movies. I argue all the time that bad special effects and sub-par acting should be ignored as long as there is a good story bee-hind it all (Ha, see what I did there!), but this film doesn't even have the good story to back it up. What this movie does have is so much nudity it's almost rediculous. I'm not kidding. There are two nude scenes with in the first fifteen minutes of the movie. There are a pair of boobs in almost every other scene. Now that doesn't make for a good movie mind you, but I have to admit that the over abundance of boobies coupled with a silly plot does make for a pretty entertaing ninety minutes. I'm not going on record and say it's an amazing film, but for what it is it's not that bad.

I always find it odd how some of the older horror and sci-fi film have this odd kind of sexuality behind tham. Alot of them feature monsters falling in love with or lusting after attractive and helpless women. While I was watching the movie my mind kept flashing back to that concept. I just thought it was interesting to note that this time around it was female monsters taking advantage of men who display helplessness in the sense of letting lust get the better of them. Interesting.
Posted by B_Movie_Guy at 9:49 PM

Email ThisBlogThis!Share to TwitterShare to FacebookShare to Pinterest
Labels: Invasion Of The Bee Girls