Hellgate (A Little Too Familiar) 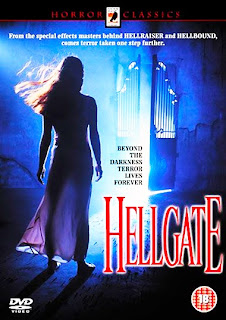 Remember that old ghost story about the guy driving by the grave yard and he picks up a strange girl who does not say much and he drives her home only to return the next day looking for her and an old woman tells him that was her daughter and she died years ago (I think I remember seing an epsiode of "Unsolved Mysteries" that did a segment about it)? Now imagine if someone decided to give that story a ninety minute backstory. "Hellgate (1990)" was directed by William A. Levey. It stars Ron Palillo (from "Welcome Back, Kotter," ask your parents), Abigail Wolcott and Carol Trichardt. The film tells the story of a girl killed by a motorcycle gang and her father who finds this crystal that bring things back from the dead. He (obviously) uses the crystal to bring the girl back to life and she, in turn,seduces travelers and brings them to their small town so her father can murder them. To be perfectly honest this film does have its high points. The overall look is really cool and for the vast majority of the movie it is genuinely creepy. 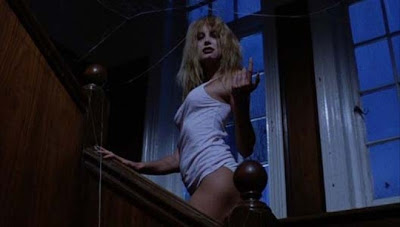 Unfortunately, every other aspect of this movie is garbage. The actors and actresses are just just terrible and the dialogue is unbelievably bad (seriously, who talks like that?). The movie was shot in 1989 but the special effects are straight out of the 1970's. The scenes that are supposed to take place in 1955 (most of the film is set in its current time) do not look like the 1950's at all. The only indication I got that it was the 50's was the soundtrack changed. Overall this was just a boring and forgettable movie. I almost completely lost interest half way through. In retrospect, I should have just watched "Unsolved Mysteries."