A Serbian Film (I'm Really Going To Hell For This One.) 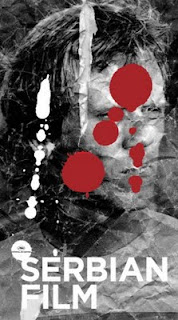 Every once in a long while a film comes along that touches us, inspires us and moves us. This is sure as hell not that film! This could be one of the most depraved and violent films I have ever watched, but oddly, I couldn't look away. The film was released (not in America) in 2010 and was directed and produced by ﻿Srdjan Spasojevic. It stars Srdjan Todorovic, Sergej Trifunovic and Jelena Gavrilovic. The plot revolves around a former porn star who is having money problems and agrees to do one more project to make money to support his family. He agrees to the film without any knowledge of what he will have to do and is consequently pushed to his limits.
I cannot in good conscience recommend this movie to anyone. That is not to say that I didn't enjoy the film, the honest truth is that I cannot decide if I liked it or hated it. On more than a few levels, this film actually offended me (and I'm a very difficult person to offend when it comes to movies), but there was a strong enough story that I kept telling myself "I have to see what happens to these people!" On top of that, this film features one of the best twist endings I've seen in a very long time (Must not spoil! Must not spoil!). On the other hand, like I said earlier, this IS one of the most depraved and violent films I have ever seen. This distinction reaches past the blog as well.
By the end of the film, I saw rape, mutilation, drug use, pedophilia and necrophilia. Beyond that, what really makes this film horrific was that the actors and actresses were so good that I was buying into every single moment of it. In most of the gore and exploitation films I've seen, there is a comic element to it because of bad acting, bad dialogue and bad special effects. This movie suffered from none of those problems. It was one hundred percent believable from start to finish, and that is what makes it so unnerving.

Email ThisBlogThis!Share to TwitterShare to FacebookShare to Pinterest
Labels: A Serbian Film