Witchslayer: Gretl (WHAT THE HELL IS THE REAL NAME OF THIS MOVIE?!) 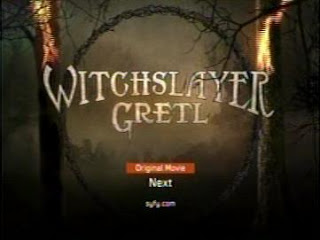 Score: 2 Out Of 10
Holy Balls, this was bad! My first post was in regards to a film called "Slaughtered Vomit Dolls." That movie was so bad I honestly thought that nothing could have been worse. Luckily the SyFy channel was able to prove me wrong. This (made for T.V. SyFy channel original) movie stars Paul McGillin, Jefferson Brown and Shannen Doherty. The plot is simple; a grown up Hansel has become a (not so badass)witch hunter and is soon disturbed to find that his sister's body is now inhabited by the head witch. There are some subplots in there but all of them are pretty lame. Boring plots aside, there are so many things wrong with this movie that it's almost a crime. It suffers from bad acting, writing, dialogue, special effects, directing and sets. In order to prove a point, I will address these individualy.

Acting: The setting is supposed to be Germany. Would it kill them to have at least one person speak with a German accent?

Writing: The plot and sub-plots together make it feel like the story was written originaly for a video game, but then they changed there minds and mad a movie instead.

Dialogue: It's a period piece, they should at least talk like it's the mid eighteen hundreds.

Special Effects: The CGI in this one is so bad it's... well... it looks like every other SyFy channel original. So yeah... pretty bad.

Directing: Was there a director? If so IMDB doesn't seem to know he exists and neither do the actors.

Sets: With a few exceptions, the entire film looks like it was shot in a small patch of woods in New England.

I guess I shouldn't get too upset. Given the history of SyFy channel orignal films I should have known what I was getting into, but when you write a blog about bad movies it only stands too reason that sooner or later you will find yourself writing about something on the SyFy channel. That being said, what really dissapoints me is Shannen Doherty. Her acting in this was terrible. This movie is an example of why I belive she will be doomed to T.V.  and not theatrical films for the remainder of her career (including commercials that run during day time talk shows). That's upsetting because she used to be not bad as an actress. If you missed the premier and you see it coming up again on the program guide or maybe on demand and decide that you need to get your Doherty fix (I can't imagine why you would need a Doherty fix), do yourself a favor, Watch "Mall Rats" instead.

P.S.
Serously, if you go on the internet looking for this film, be warned, it has two or three differnt titles!
Posted by B_Movie_Guy at 8:04 PM