The Beast Within (It WAS a toupee) 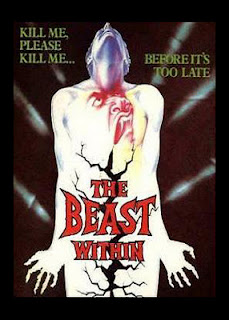 Score: 7 Out Of 10
I have to hand it to director Philipe Mora (it should come as no surprise after watching this that he also directed the second and third Howling films), I was not expecting much from this movie. After I got about half way through it, I really started to like this one. I have to mention, though, that the film is pretty dark. Not in a metaphoric way, I mean I had a hard time seeing what was going on for good parts of the movie. At first I was some what annoyed with this, but after a while I started to see how the darkness actually served the film. The plot is a little weird, it focuses on a monster that rapes (again with the rape?) a woman and seventeen years later her son starts to go all kinds of sick house on a small southern town. The main cast (folk singer Ronny Cox, Bibi Besch and Paul Clemens) all put up some pretty good performances. Admittedly, the story is a little much but the fact that the cast turns in such a good performance really helps to sell the movie.

So let me mention that this is not a werewolf film. What is really odd here is that a lot of the art associated with this movie hints that it's about a werewolf, but when you watch it, the word "werewolf" is never actually used. The dialogue actually keeps hinting that the monster in question is more like a half man half cicada. That, by the way, really bothered me much more seeing how I really dislike bugs! Also let me touch on the the two things that I'm sure most people reading this are going to be wondering (and no I'm not talking about whether or not there's nudity... there is).

1) Is there a good transformation scene?

2) Do they show the monster too much?

The answers are yes, and unfortunately, yes. The transformation scene was one of the better ones I've seen over the years, and once again, Paul Clemens' performance is really what made it cool. Unfortunately, the last seven or eight minutes of the movie shows way to much of the monster, but I don't want to fault them too much because after a really good transformation scene, it's a little too hard to just leave it to peoples imaginations.

Email ThisBlogThis!Share to TwitterShare to FacebookShare to Pinterest
Labels: The Beast Within