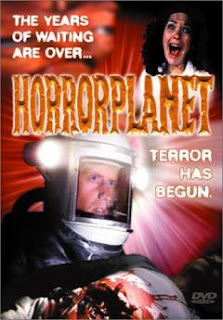 Score : 6 Out Of 10
For nine months I have been waiting for the B-movie wife to go into labor with our first born. Today was supposed to be the due date (BTW, I really love the looks people give you when they ask when your wife is due and you say today), but after spending an entire day wandering around the nearest big city she still hasn't gone into labor. So this evening I decided to watch a movie for the blog to pass the time. When I came across "Horror Planet" (originally released under the title "Inseminoid") and read the description it seemed like a must see given my situation. The plot is as follows: A crew of space archaeologists come across an alien being who rapes one of their crew mates. Later she discovers she is pregnant and starts murdering and cannibalizing the rest of the crew. "Horror Planet" was released in 1981 and was directed by Norman J. Warren. It stars Robin Clarke, Jennifer Ashley, Stephanie Beachman and a bunch of other people I've never heard of.

I have to give credit where credit is due on this one. It never lost my attention and the overall story and dialogue were actually pretty good. On the other hand, the film suffers from some pretty sub par acting and lame creature effects. I give them credit for coming up with the creatures they did for a budget of only two million dollars, but the film might have benefited more if the creatures were on screen less. The more you see of them the more disappointing they become. I would have been better off imagining the monsters. Once again the acting wasn't particularly good. Every single person in this film was either completely over doing it or was completely phoning it in. Not a lot of middle ground. As whole, I must say this has not turned me off to Norman J. Warren as a director. In the future I'll most likely be watching some of his other films.