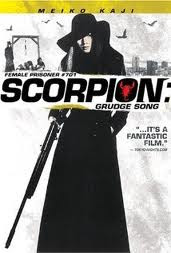 This is part three of a three part series, so like I said in the second part, if you have not seen the first two (we skipped the film in the series because it was made clear to me by more than a few people that it just wasn't worth watching and you could watch the third without missing any of the plot) you might not want to read this because there will be spoilers...
So by comparison to the first two movie I watched from this series, this one is actually kind of a let down. The film opens with our main character, Nami (Once again very well portrayed by Meiko Kaji), once again out of prison and attempting to evade authorities. This is a plot hole. (Spoiler) The last movie ended with her intentionally going back to prison so she could torture an evil pimp who held her friend captive. So how the hell did she get out? I also noticed while watching that the overall style of the film seemed to be some what diminished. It was a lot less colorful and a lot of the cool dialogue seems to have gone missing entirely. It's my theory that the overall problem with this film is Yasuharu Hasebe taking over as director.
Another problem here is that the film is trying to put forth a message of anti-authority and the horrors of capital punishment. Unfortunately the message is lost in scenes that are needlessly violent and characters who seem to make erratic decisions. At one point I found myself asking, "Why are they raping her?" "Why did I need to see that?" I'm not going to go on a lecture here about how there is too much violence, nudity or sexuality in films, I'm just saying that it all needs to have purpose. If it does not serve the plot, it does not need to be there.
In closing, I won't say that this film was bad, it just wasn't good enough. Unfortunately I can't even tell you to watch it as a stand alone, because then you'll just spend an hour and a half with a lot of unanswered questions. Watch the first and third (the second is terrible, remember?) and if you still feel like you need closure then watch it. If not, just be happy with the last films ending and pretend this one doesn't exist. It's like the Rocky V of Japanese women in prison films.