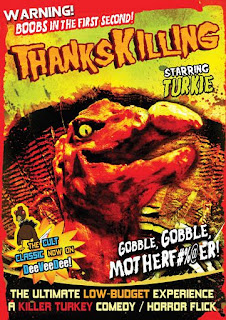 Score: 2 Out Of 10
Allow me to set the scene for you. It's early in the seventeenth century, a woman in pilgrim garb who looks to be in her late thirties or early forties is running through the woods with her breasts exposed. Actually the movie starts with a tight shot of her nipple. Something that apparently sees everything in shades of purple is chasing her. Eventually she trips and falls boobs first in the dirt and is murdered by a fowl (get it... bird joke!) mouthed turkie wielding an axe. That is the best scene of the movie. The rest is pretty much down hill from here.

ThanksKilling was released in 2009 and stars Natash Cordova, Lindsey Anderson and Lance Predmore. It was directed by Jordan Downey (for those curious, Mr. Downey is in the process of filming a sequal to this film. It will most likely appear on this blog in 2012). I"mnot even gonna try and sell you on this one. It sucks. I'm used to seeing bad writing, directing, effects and acting, but with alot of other films in this genre, you can tell that the people who made it really had heart and were really trying to make a good movie. This on the other hand, has no heart and no soul. It feels like the people who made this movie made it just because they had nothing better to do. The acting is so bad it's almost as if the actors aren't even really trying. No joke the best performance comes from M.I.L.F. porn star Wanda Lust (she's the pilgrim with the boobs).

The other thing that bothers me about this film is it's supposed to be a comedy but it's just not funny... at all. Seriously, how many bird puns can you make in a film that's only sixty-some-odd minutes long. I'm gonna have to advise you to stay away from this one. It's just not worth the time you'll spend watching and then trying to forget it.

Email ThisBlogThis!Share to TwitterShare to FacebookShare to Pinterest
Labels: ThanksKilling