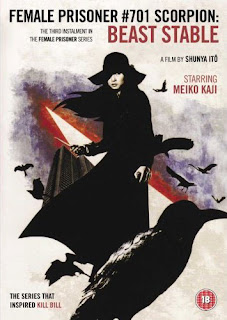 Score: 8 Out Of 10
So let me say this right off the bat, the film featured on this weeks blog is a sequel to last weeks entry (true, there is one film between the two, but this one is far superior to that sequel and picks right up where the first film left off. By skipping the second film, you're not missing anything. I promise). By reading this you will know the ending to the first film. This is the official "Spoiler Alert." If you read any further it will ruin the ending to Female Prisoner #701: Scorpion. She kills the guy who set her up and his whole crew after she escapes from prison. Told you so.
Wow. This is a really good follow up. I have to admit I'm kinda jaded when it comes to sequels. Lets face it, we live in a society where a second and/or third film normally means ninety minutes of actors and actresses not returning, directors not returning, bad plots and movies made quick and cheep just to cash in on the success of the original. Director Shunya Ito clearly has his shit together. The first thing he does right is bring back Meiko Kaji as Nami Matsushima (Scorpion). No joke, she plays this role so well, if I ever run into her in person I'm going to turn around and walk away out of fear for my life.
The story follows our main character, Nami, as she is now out of prison and trying to evade authorities (she doesn't help that cause by spending the duration of the opening credits running through Tokyo waving a severed arm around). Not long into the movie she befriends a down-and-out prostitute and soon attempts to liberate her from her pimps. Despite the films plot (and the previously mentioned severed arm waving), this one is actually a bit slower than the first. There is some graphic violence (I don't want to give to much away, but there's a pretty nasty scene with a golf club and I'm wondering if writer, Hiro Matsuda, has something against pregnant women), but is few and far between. There is also not a lot of nudity when you compare it to the first as well. The main focus here seemed to be character building and giving the audience a bit more of an idea as to what makes Nami tick.
Overall, I have to say this is a pretty great follow up. Meiko Kaji turns in a great performance despite the fact that her character is silent through most of the film. The plot also serves the first film well while leaving out enough details to still be enjoyable if you haven't seen the first. The only question left is how good will a third film be?

Did you see the arm in the trailer? Awesome, right?