Retardead (A Fail On Every Level) 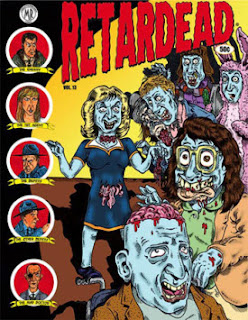 Score: 1 Out Of 10
I don't even know where to begin with what is wrong with this film.  Have you ever sat through a movie to see the main characters make a stupid pun at the end just before the credits role and wonder if the entire film was written just for that one pun? That pretty much sums up how I feel right now. For a film that runs a little more than an hour and a half, the best part is when they make the lame joke at the end (well, that and when the credits finally came). "Retardead (after having viewed the film I realize now just how appropriate that title is)" was written, directed, produced and stars Rick Popko and Dan West. It also features Tony Adams and Michael Allen. All of the people mentioned should feel ashamed.
The movie opens with some fake trailers (A la "Grindhouse"), then flows into a film that is supposed to be a sequel to "Monsturd." The plot revolves around a little girl telling a story (that aspect of the film is for some reason abandoned by the end of the film) about a mad man who creates zombies out of mentally challenged adults who for some reason are in a classroom like setting (this is never explained). The problem with the movie is that until about half way through, it's a movie about the police chasing a guy who masturbates in public. The movie as a whole falls short because of bad acting, bad camera work (it feels like the movie was shot on hand held digital cameras) and the nagging feeling that the film was written by a thirteen year old. Overall it was just boring.

Email ThisBlogThis!Share to TwitterShare to FacebookShare to Pinterest
Labels: Retardead