Fankenstein and the Monster From Hell (A Big Disappointment) 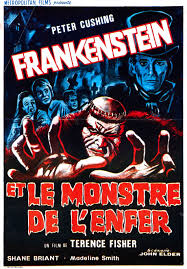 Score: 4 Out Of 10
I am a fan of horror movies produced by "Hammer Films Productions." More often than not I feel that their versions of the classic monsters are some of the best around. Although once in a while even Hammer lets me down. "Frankenstein and the Monster From Hell (1974)" was directed by Terence Fisher and stars Peter Cushing, Shane Briant and Madeline Smith. The film is about a young doctor who begins trying to recreate Dr. Frankenstein's infamous experiment, but is apprehended and sentenced to five years in a psych ward. Once there, he finds the legendary doctor himself and they soon begin work on a new creature. The first problem I noticed with this film is the acting. Peter Cushing is fantastic (as always) as Dr. Frankenstein, but everyone else in the film is just plain terrible, Including the monster. To be fair, I do not put all of the blame on the actor playing the monster (David Prowse). 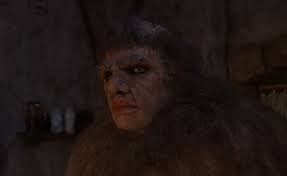 If you can not tell by the picture to the right, Prowse was wearing a lot of make up and some prosthetics and as a result it seems he had to play the role with out being able to change his facial expressions, much like he was wearing a mask.  Conveying emotion with out people being able to read your facial expressions is very difficult for any actor, but not impossible (Ex: "The Maskmaker (1959)" starring Marcel Marceau). In addition to (mostly) poor acting the writing was also not very good. Nothing happens for literally the entire first half of the movie, and things do not really begin to pick up until the films climax (the last ten minutes or so). The whole film just feels forced, not as imaginative, or anywhere near as stylized as many of the other "Hammer" horror films that I have seen. In the end, I was just downright disappointed.