The ABC's Of Death (R Is For Repugnant) 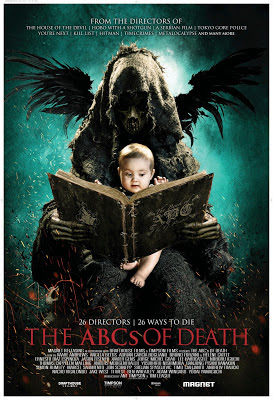 A lot of people have been asking me about this film lately, and I have to admit, after I saw the trailer I was pretty excited to see it. If you are not familiar, the premise of the film is that twenty six directors were all assigned a letter of the alphabet then picked a word that begins with that letter and shot a death scene associated with that word. Example: "F" is for fart, so director, Noboru Iguchi, shot a scene where to girls fart each other to death. No, seriously. The directors themselves are from all over the world and the film  is in quite a few different languages, so most of the film is subtitled (apologies to those of you who hate reading). The shorts themselves range from "pretty good" to "What did I just see?" Therein lies the problem. Only a handful of the scenes fall into the "pretty good" column, a couple fall into the "what did I just see?" column, but most fall into the "boring" or "been done before" column. A couple of times I had to fight the urge to fast forward to the next letter in the film. There was one scene that actually disgusted me (and it takes a lot to disgust me), but I will not call this a good thing because that scene in particular involved pedophilia. 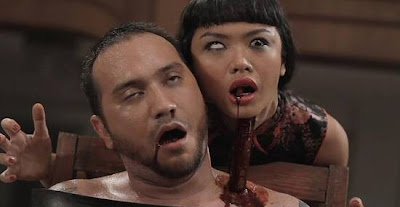 Normally, I like a good anthology film (as stated in my previous post), but this one was not good. The main problem is that twenty six death scenes all with there own separate little plots is just too much. If you just want to show us twenty six death scenes with no real back story, that is fine, but if you're trying to build a story with every scene then I need more time to learn about what is going on. Many of these shorts seemed like they would have been much better if they were just there own full length film. On the other hand (because each scene ends with a letter and a word) I did have fun trying to guess what word they were each shooting for.