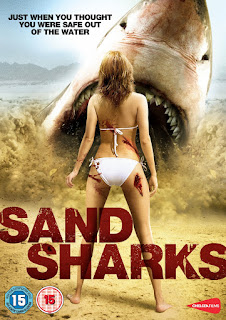 Do not let the picture to the left fool you, this movie is pretty bad. In fact, the shark you see here does not match any of the sharks shown in the movie at all. The sharks that are shown in the movie are these giant purple and blue monsters who look some what prehistoric, or at least that is what I think they were going for.  "Sand Sharks" was directed by Mark Atkins. It stars Corin Nemec, Brooke Hogan (yes, THAT Brooke Hogan) and Venessa Lee Evigan. The plot is as simple as it gets. A concert promoter and all around douche bag comes to a small California town (where his creepy dad is also the mayor and played by Edgar Allan Poe IV, who is a distant relative of the famed poet) to put on a concert to capitalize on spring break, but all the happenings are soon ruined by sharks who swim through and attack people via sand (and in one or two scenes water as well). There are some sub plots here but none of them are even worth mentioning. 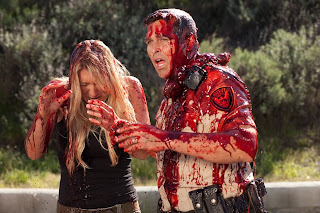 The problems with this film become apparent almost immediately. The acting is bad, the writing is just bl eh and there is so much CGI (Computer Generated Imagery) that at times I thought some of the party goers in the films climax were computer generated. I understand that for a film like this CGI just make sense, but it just looked so bad. It was almost like watching someone play a video game. Unfortunately the real loser in all this (besides the audience) is Brooke Hogan. After a less than successful music career this film is a big hint that acting might not work out as well. I get that her dad was a famous wrestler (if not the most famous wrestler) but maybe she should find a job outside of the entertainment industry
﻿