Bigfoot's Wild Weekend (If You Watch Only One Bigfoot Movie This Year...) 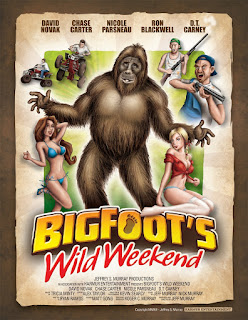 Score: 5 Out of 10
If you have ever wished that beef jerky commercials had more nudity in them then I have the movie for you. It is that special kind of movie where my wife came in about thirty minutes in, said "This looks really stupid," and then left the room five minutes later. Bigfoot's Wild Weekend was directed by Jeff Murray who also co wrote the film with Dearborn Murray and Ryan Ramos (why did it take three people to write this film?). The plot is as good as you can expect from a film with this title. Bigfoot is on the loose (and apparently horny... and a little drunk) and is soon spotted by campers and a fisherman who report the "half man/half ape" to a tabloid paper who spends little time sending a less-than-confident reporter to cover the action. Soon after the local news and some redneck hunters are also chasing down are hairy protagonist. For the record, because I know why most of you read this blog, yes there is a fair amount of nudity throughout the first hour or so. 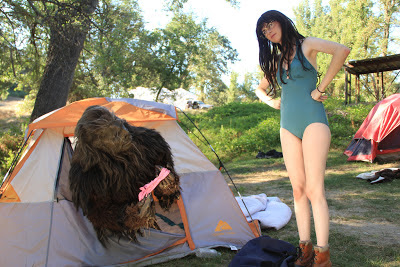 So I'm not gonna try and bullshit you here, this movie was not really that good. It got a good couple of laughs out of me throughout, and it did hold my attention pretty well. On the other hand, there were more than a couple times when I caught actors or actresses looking at the camera (not counting a scene where one character breaks the fourth wall) and the sound quality changes quite a bit, sometimes once or twice in the same scene. But for a low budget comedy about a drunk and horny Bigfoot and some campers who seem a little too eager to take their clothes off, it could have been a lot worse. On a related note the director mentioned to me that he is working on another film this year and I will say that I am willing to watch another film Mr. Murray. I guess for five dollars, I got what I paid for.
Love,
The B-Movie Guy.