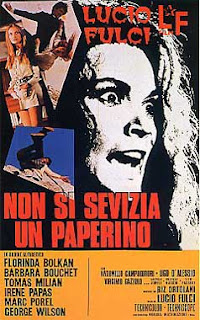 Every so often I get a movie that hits me in a very emotional way. ﻿Maybe it is because I recently became a father for the first time, or because there seems to be so many stories in the news lately that this film reminds me of. I think what is most surprising is that it was directed (and co-written) by lucio fulci. I am not used to fulci films soliciting this kind of response from me. Normally I just get a cheep thrill out of all the over the top violence and the over abundance of nudity. The plot of "Non Si Sevizia Un Paperino" ( or "Don't Torture A Duckling" as it was released in America) focuses on a series of child murders and the people investigating and suspected of these murders. The story is emotional, disturbing, angering and at times almost a tear jerker (once again this could just be the parent in me talking). The film stars Florinda Bolkan, Barbara Bouchet and Tomas Milian. All of the actors gave pretty good performances. There were a couple of moments where the acting seemed to go down in quality a bit, but over all these moments were quickly forgotten.

I think what surprised me the most was the social commentary found in this film. fulci and crew are not just taking shots at law enforcement but also the public and the media for their knee jerk style reactions to violent crimes. In addition they also manage to make some statements about the catholic church (if you are heavy into Catholicism you might want to avoid this one). I can honestly say I do not think I have encountered another fulci film with this much to say about society. If I have, I probably did not notice because of his usual level of violence (he was once quoted as saying "Violence is Italian art!"). Speaking of violence, I will not try to tell you that this film was devoid of violence, but I did notice far less than the average fulci film (ex: he has two films on England's notorious "Video Nasties" list). In closing, I am absolutely in love with this film. It just might replace "Zombie" (or "Zombie 2" for you purists out there) as my favorite fulci film.