The Call Of Cthulhu (An All New Silent Movie!) 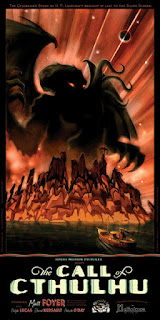 I have always had a fondness for silent films. They have a certain charm that seems to have been lost when the "talkies" started to get released. I can not quite put my finger on it. Maybe it is the way the actors always seem to be over acting, or how the horror and science fiction films of that era all seem to share in a very surreal style (ex: "The Cabinet Of Doctor Caligari" and "A Trip To The Moon"). So you can imagine how I was immediately attracted to a film advertised as a "new silent film." Released in 2005, "The Call Of Cthulhu" was directed by Andrew Leman and stars Matt Foyer, John Bolen and Ralph Lucas. The plot of the film is as follows: A man comes across the research carried out by his late grandfather regarding the "Cult Of Cthulhu (when the next census comes around I am going to list that as my religion)" and he himself becomes drawn into the mystery. 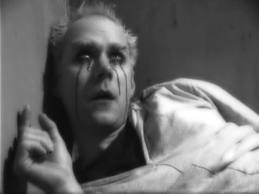 "Call" is a short but sweet movie. It only runs for about forty five minutes and all the acting is particularly good... well, when I say good, I mean they a good job of completely over acting. As previously stated, that fits right into the film's overall style. There is no real violence in the film. The only blood I remember seeing is sitting to the left of this paragraph and because of the "silent" style there is also no nudity. But who cares? This was still a pretty entertaining film! There were however a couple things that bothered me. If you watch carefully you can see little bits of modern technology slip into frame. On top of that, The visual effects and camera work felt more akin to the "talkies" that came in the two decades after silent films. Despite this, though, I still thoroughly enjoyed the full forty five minutes of this film. That in and of itself makes it worthy of an eight out of ten rating.