Rock 'N Roll Frankenstein (how does a movie with this awsome of a title fail so bad?) 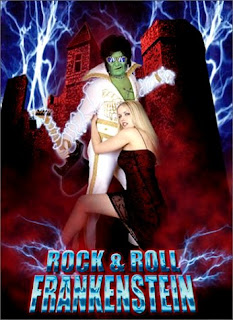 Score: 3 Out Of 10
So what we have here is a film that I was super excited to watch, then got about an hour into the film and just started to feel disappointed. I do have to give it some credit, though. The movie did inspire the following conversation between the B-Movie-Wife and myself:

"Rock 'N Roll Frankenstein" was released in 1999, stars Graig Guggenheim, Jayson Spence and Barry Feterman. It was written and directed by Brian O'Hara. The plot is as follows: A down on his luck music producer hires his nephew (Dr. Franky Stein), an out of work coroner (also the guy playing jerky-jerky to the autopsy photos... ew.), to stitch together parts of dead rock stars to build the ultimate rock front man. Everything is going just splendidly until Franky mistakenly grafts Liberace's penis to the monster.
This film at heart is a modernization of the classic Frankenstein story (just swap the 'wrong brain' bit with a 'wrong penis' bit), but quickly becomes just a series of bad gay jokes. the only part of the film that really got me laughing was a wonderful scene where the monster (referred to as 'King') tries to jam a gerbil up his own ass, but then gives up and in a moment of total randomness, decides to bite the little thing's head off. In the end, unfortunately, what we are left with is 88 mins. of 'Troma would have done it better.'