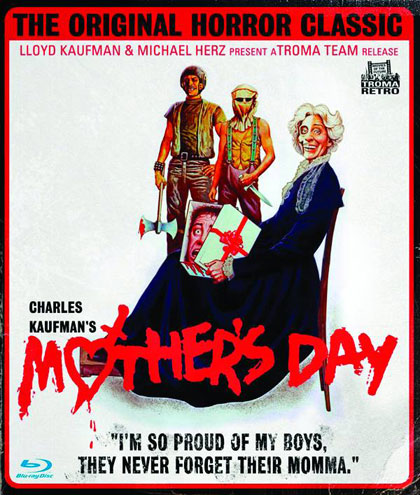 Score: 7 Out Of 10
Oh, where to begin. Let's start with the plot. Three college roommates reunite for a weekend camping trip and are kidnapped, beaten and raped by backwoods hill-folk and there psychotic mother. It stars Nancy Hendrickson, Frederick Coffin and Beatrice Pons. It was written and directed by Charles Kaufman (brother of some-what-legendary independent film maker, Lloyd Kaufman) and produced by Troma Films. Allow me to say now that the fact that it's a Troma film from the 80's should give you an idea of how this is going to go.

This movie has a huge personality crisis. It can't decide if it wants to be a serious 'horrible things happen to not so horrible people when they enter very rural areas type of movie (much in the style of "The Texas Chainsaw Massacre," "Last House On The Left" and "Virgin Spring"- look that one up)' or a typical campy bra less Troma movie. I don't mean to sound disrespectful to Troma (more often than not I really love those guys), but this one had me entertaining the idea that maybe I have a problem with split personality. I spent the better part of the last 90 mins. either rolling my eyes or seriously rooting for the girls to escape and/or get revenge on their captors. Make up your mind, Charles! On the other hand I do have to hand it to all the actors and actresses for handing in some very solid performances. Like I said, for a good part of the film I was really into it.
The special effects weren't bad. They weren't great, but they weren't bad for a film shot for around $115,000. I was also impressed with the scenery. I was able to tell that they really did go to the middle of nowhere to shoot this film. Rumor also has it that the house where a good part of this film took place (which was decorated with spray painted phrases, like: "Die, Bitch!" and "Sex is immoral," and a John Travolta poster) had a dead body in it when the crew discovered it. Something like that just screams "DON'T FILM HERE!" On a scale of 1-10, I give this one a 6. It would have scored higher if it was more consistent with it's style, but was still enjoyable.