Detroit 9000 (Welcome To The Motor City) 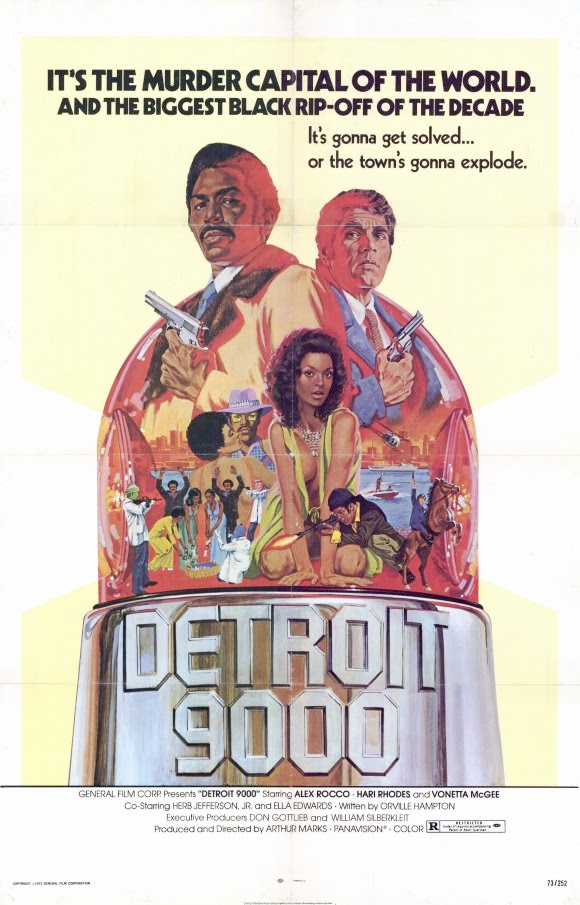 Score: 6 Out Of 10
Just because I know someone who reads this will wonder, '9000' is in the title because at the time this film was made, '9000'﻿ was the police code for officer down. "Detroit 9000 (1973)" was directed by Arthur Marks and stars Hari Rhodes, Alex Rocco and Vonetta McGee. Also, keep an eye out for Scatman Crothers; I really enjoyed his role in this movie. The plot tells of one white cop and one black cop that team up to solve a jewel heist that targets a black senator who is announcing his candidacy for mayor. For a film in the black exploitation genre, I have to give this film credit for being very well made. The dialogue is fun but not to corny, the acting was above par for the genre and it was pretty well directed. For the vast majority of this film, I was really into it. I admit that there are some moments when things slow down a little too much, but those moments are few and far between. I also want to mention the soundtrack. It was great! there were so many moments where I was really in to the music. So much so that I actually watched one scene over again because I was so into the music I missed what was happening!

The down side is that this film has a powerful message behind it. I know that race is a pretty touchy subject and I do not want my blog to become a political argument, so I am going to make this point as well as I can without being offensive. Here goes; Normally I appreciate a film that can make a good statement, but this movie made it over and over. The first hour of the movie I was really behind them, but then after being beat over the head so much, I found myself rolling my eyes during every other scene. What the film makers should have done was make there message more subtle and let the audience draw there own conclusions about what this movie was about. My conclusion is that despite all this movie had going for it, they blew it.
Love,
The B-Movie Guy.
Facebook: B-Movie Guy   Twitter: @BMovieguy