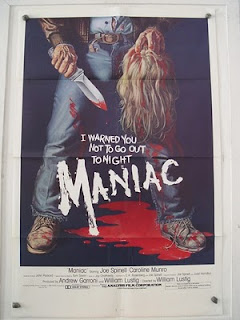 Score: 7 Out Of 10
Hell-o B-Movie fans! First and foremost I must apologize for being a day late on this one. I was working on a bit yesterday with the wonderful people over at depravityave.com. It was some of the most fun I've had in a while, and a big thank you to those guys for letting me participate. That being said, this week's film is the 1980 cult slasher film Maniac!

This is film directed by William Lustig, and stars Joe Spinell, Caroline Munro and Abigail Clayton. The plot revolves around a grown man who's mother died while he was a child and now he feels compelled to go out at night and murder women (why does that sound so familiar... Ki, ki, ki ... Ah, ah, ah). Believe it or not, this one was actually pretty entertaining. It was very well paced and did not hold back on the gore at all. Keep a look out for a cameo appearance by legendary special effects artist Tom Savini, as well (he's the guy taking a shotgun blast to the face).
Fun Fact:  Rumor has it, the song "Maniac" was originally written for this film, but was left on the cutting room floor. Later it was rerecorded with different lyrics and used in the film "Flashdance."

P.S.
Allow me to tell you a story. I couldn't help but laugh a little to myself when I saw Tom Savini pop up in this film. The reason is because some years ago, The B-movie Wife, Myself and our friend Jason were making plans to go to a convention. This was going to be a particular big one for Jason and I. One of our favorite movies at the time was "Day of the Dead," and the man responsible for the special effects, Mr. Savini, was going to be in attendance signing autographs and answering questions. About an hour before the con, I called Jason to tell him I was on my way to pick him up. He informed me that his girlfriend, who apparently had bought season passes to Sea World, informed him that morning that they taking their son to see world that morning.

"You think I don't know that?! She said I can't miss this. It's a chance to bond with my kid."

"You can do that tomorrow!"

So fast forward about an hour, The Mrs. and I are at the hotel and walking towards the convention hall and she's asking me what I'd like to do first. I respond, "Well let's find an ATM, then we'll hi... OH HOLY CRAP THAT'S TOM SAVINI STANDING RIGHT OVER THERE!" He actually here's me say this and gives me a somewhat shocked look. Later in the day I collect myself and go over to his booth and apologize for my out burst and we spend a little time making polite conversation. Then I explain to him that my friend Jason was supposed to join us on this excursion but his girlfriend (not wife, girlfriend) pulled the leash and made him got to Sea World instead. At this Tom actually looks offended and repeats "Sea World?!" He then (no joke) took an 8x10 photo of himself and a sharpie and starts writing on it, signs it and hands it to me and says, "Make sure he gets this."

I thanked him and walked away satisfied with meeting and having an experience with one of my childhood idols. Later I read the photo and it said, "Dear Jason, Sorry you're so pussy-whipped. Love, Tom." True story!

Email ThisBlogThis!Share to TwitterShare to FacebookShare to Pinterest
Labels: Maiac