Nude Per Satana (Naked For Satan) 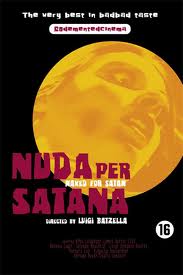 Score: 3 Out Of 10
This week I thought I would write about a real gem of Italian eroticism, then I watched "Nude For Satan" and decided to write about that instead. The movie is about an hour and a half and stars Rita Calderoni, Stelio Candelli and James Harris. It was directed by Luigi Batzella and was released in October of 1974. The film is about a man who arrives at an Italian castle and begs the inhabitants for help with an injured women and is soon sucked (in more ways than one... you know what? I'm just going to apologize now for that joke and anymore I might make later. Sorry.) into a weird fantasy world of sex and... um... well... sex.
The real problem with the film is that it spends ninety mins. trying to be artistic, but after twenty mins. I was left with the impression that it was just an excuse to show the same woman naked over and over, then late in the movie show three women naked over and over. Not that there is anything wrong with that. The other problem, and I'm not sure how this happened, what with all the boobies and all, but the movie as a whole was just plain boring. Several times I fought the urge to pick up my iPad and start looking through Facebook. The story didn't draw me in at all, the dialogue was often silly or just weird and the incredibly fake spider didn't even get me laughing like other incredibly fake spiders have before (see The Fly (1958) and Tarantula (1955)). I never thought I'd say this, but... I guess lots of nudity doesn't make for a good movie. Wow. That hurt a little to say out loud.

Email ThisBlogThis!Share to TwitterShare to FacebookShare to Pinterest
Labels: Nude Per Satana